Kris Greene and other home-based Personal Care Attendants (PCAs) do not want to be represented by the SEIU. With help from the Center’s Employee Freedom Project, Kris has launched a call at MNCPA.org for a new election so the 27,000 PCAs all over Minnesota have the chance to revisit the 2014 vote that made SEIU their exclusive representative.

Kris recently told her story in the Star Tribune. Another PCA published a “Counterpoint” to Kris explaining, “Why, as a personal care attendant, I’ll stick with the union.” The Counterpoint writer made a very sympathetic case for why he and his family members decided to join the SEIU.

The writer of the Counterpoint is part of an amazing family that has taken in many foster children, some of whom have a disability. He and other family members care for his adopted siblings as PCAs. His Mom is a great advocate for foster kids and people with disabilities down at the Capitol. I really admire her generosity and tenacious love for vulnerable people. That said, I respectfully disagree that people who accept transfer payments like PCAs should be unionized as “state employees” and that SEIU is the best representative for PCA needs at the Capitol.

For starters, as you can see from the map below, PCAs are spread all over the state, working in private homes, often their own. They are not “state employees” who work together, where they might talk about an upcoming union vote, or how they could be heard at the Capitol. The U.S. Supreme Court in Harris v. Quinn (2014) said PCAs are not “full-fledged public employees” and do not have to pay mandatory dues like other public employees. Unfortunately, the Court deferred to state legislatures and allowed unionization based on the Medicaid benefit. 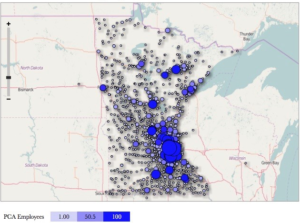 Aside from collecting Election Cards to call for a new election, we created MNCPA.org so that PCAs like Kris Greene could build a community, and perhaps create an association that would keep them informed and represent them in the future at the Capitol. It would be great if PCAs could use the power of the internet to network with one another. An association would cost a lot less than the SEIU and would be more effective at protecting the PCA program.

We have found that many PCAs were simply unaware of the union vote in 2014 and threw the ballot away. Or they signed a union card not understanding what it meant. Or they were just too busy caring for a loved one!

The 2014 vote to make SEIU the exclusive bargaining agent for all home-based PCAs, while legal under Minnesota’s labor law, was nonetheless unfair by almost any other measure. Only 5,800 people out of 27,000 sent in a ballot, with about 13% of all PCAs (less than 3,500) voting for the union.

We can and do argue with the law, and wonder if SEIU was able to essentially select many of the PCAs who voted. SEIU had access to the list of PCAs so SEIU was able to create a database of who was most likely to vote Yes or No and focus its field efforts on securing the vote.

That 2014 vote, and contract that followed, allows SEIU to collect voluntary dues from PCAs paid under Medicaid who chose to be members (or who unwittingly signed a card), thereby reducing funding for all PCAs—but here is the kicker. SEIU now speaks for all 27,000 PCAs, whether they voted for or against the union, or did not vote at all.

At the very least, this vote deserves a do-over with a majority of PCAs getting to vote.

Next, there is nothing in the 2014 contract, including a new benefit of paid time off (PTO), that the 2013 Legislature could not have provided to PCAs via statute. Instead of passing a law to create a union, they could have passed a law adding PTO. The contract has a “pay floor” or hourly minimum but PCAs are already making much more than that hourly wage. The legislature raised PCA pay through 2017, not the SEIU contract.

Just a note: SEIU’s friends at the Obama labor department imposed new overtime rules that have created hardship for some disabled adults and cut the hours for their PCAs. Obama insisted on an OT rule but did not fund the benefit.

The PCA program has been in place since the 1970’s when the state wisely decided that it was often better for qualifying, disabled Minnesotans to remain at home rather than be institutionalized. Family members are often the best caregiver. The 2013 law, however, that declared PCAs “state employees” was just a cynical ploy to give SEIU new revenue to spend on a left-wing political agenda and candidates, all at the expense of the disabled, PCAs, and the taxpayer.

Remember, PCA benefits and funding must still come from the legislature, not the SEIU. So what is the union taking out of the PCA program?

I have estimated that SEIU has between 3,500 and 5,000 PCAs who pay dues. (I should be able to get all this through transparent SEIU filings but that is another matter.) Dues are 3% of gross wages up to $948 a year. Wages come directly from Medicaid. That means the SEIU is collecting between $3.3 million and $4.74 million in new revenues out of Medicaid a year.

Surely it does not cost millions to “bargain” with the state of Minnesota that has already been providing essentially the same benefit for decades.

Imagine how many PCA hours could be funded with $3-$4 million? For more information, go to MNCPA.org